The road to Etosha National Park 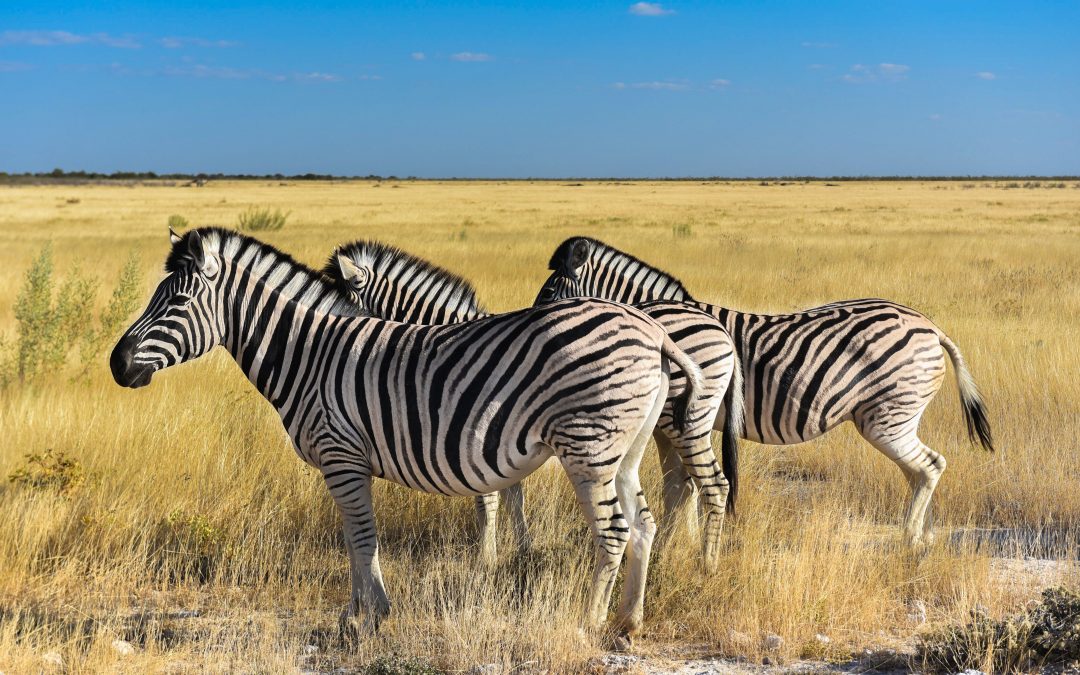 The road to Etosha National Park

We drove through Ovamboland, the northern part of Namibia, stretching for about 350 km. Town after town, city after city, and the largest number of people around. Cows and donkeys on the roads, as well as crazy cars, but first of all – asphalt. It took us 10 hours to travel those 350 km. In Ovamboland, 99% of all town names start with an „o”, I have no idea why. We got lost on the last 50 km, but so luckily, that instead of driving on asphalt, we entered Etosha by chance. The first gnu antelopes appeared, springboks, kudus, warthogs, and even an elephant. A foretaste of what we were to see for the next three days.

The first part of our Namibian adventure you can find here.

The Etosha National Park covers the area of almost 23 000 sq. km. it stretches for 360 km, which means giant expanses of protected nature. You can drive around it, but you can’t get out of the car, although I saw people who thought differently. The big African four lives here, i.e. the elephant, the rhinoceros, the leopard and the lion. Cape buffalos are missing. There are also many more animals which we could recognize as we bought the Etosha Animal Atlas?. Within the park, there are some state-owned centres where you can sleep, and at the reception, there is a huge book containing the animal register. Each tourist can write in it where and which animal they saw. Above the book, a notice from the Minister of Environment hangs, asking tourists not to register rhinos. Those mighty animals are under special protection due to the plague of poaching and beliefs that powder made from the horns of rhinos can cure AIDS. Recently, at a photo exhibition I saw a scalped rhino, dying from pain. Namibia is one of the countries which guard their rhinos like diamonds.

On the first day, we saw tons of animals, giraffes hanging around our cars, zebras and lions, but the king of our “hunt” were… hyenas. Those mighty and strong animals showed us their anger and rage when we involuntarily witnessed how they were tearing apart a kudu they hunted down. The cries of their victim ere ear-splitting, balancing on the border of scream, whimper and a child’s cry. I unwittingly turned my head to make sure that the children are safely sitting in the backseat. There were several hyenas, now and then they ran into the road, angry, or divided huge pieces of meat between each other in the bushes. A terrifying and engrossing spectacle.

On the second day in Etosha it seemed that zebras would remain the star, majestically travelling in herd towards water. One after another, they looked like ribbons meandering for a kilometre. Pretty as a picture. We drove on a narrow gravel road, calmly passing giant elephants slowly chewing on acacia leaves. They moved with the speed of two steps per thirty seconds and there was no indication of the forthcoming tragedy. From time to time, rather rarely, we passed cars going in the opposite direction. At some point, we reached a turn where we could see two cars stuck. We stopped about 10 metres behind them to give them time and possibility to pass each other. But they didn’t move. After about 10 minutes, the road behind us was blocked by another four cars. And then the drama started. One of the cars in front of us began to reverse and we could see it was pushed by another car, driving in front of it. A hand was sticking out of the window showing signs to reverse. At that point, I still thought they just wanted to pass. Only after several minutes, when the reversing car was next to me, I understood they were shouting to escape, because an angry elephant was coming. Unfortunately, there was no way to escape, as the road was blocked by the four cars behind me. And then I saw it. It was a giant, about 4.5 metres tall, angrily flapping its ears and going straight at us. I started to reverse, but the cars behind me were reversing too slowly to escape in time. In the last moment I saw a narrow pass, I got into forward gear and escaped from below the huge elephant legs, which were no further than 10 metres away from the car. We were saved! In the evening, in the animal register I wrote down the angry elephant, somewhere between the Aus pond and Olifantsbad, an elephant whose giant legs and flapping ears, even though it’s impossible I heard it, I won’t forget till the end of my life.

There is a place in the middle of Etosha where you can look at animals at night. It’s called Okaukuejo and the actors illuminated around a small pond are separated only by a fence from the spectators, who can sit all night and watch the amazing spectacle of animal life. They appear in order. The lion goes away and zebras come, a giraffe creeps carefully and then leaves the place to rhinos. You could watch forever. A bottle of wine on the bench, binoculars, a camera and discovery channel live in front of us.

You can find practical information about staying in Etosha here.

After four days of hunting animals we had to leave Etosha. We saw on our way moringa trees, also called ghost trees. There is a legend among the San people that when God created life on Earth, he discovered there were a few moringa trees left and he threw them from heaven and they fell with their roots upwards. Meanwhile, a cheetah farm appeared on our way. Supposedly, they are the fastest creatures on land, and at the same time the most docile of cats. The owner has a few of them tamed (although they’re still wild animals), and the rest you can see from a car trailer, on which you stand and the owner drives around the farm while feeding the animals. They eat about 3 kilos of meat a day. Most movies about cheetah, filmed in Namibia, are made on “our” farm in Otjitotongwe. In Etosha, even though there are many of them there, we didn’t see a single one, they are simply too fast for us.

There is a magical power in Africa flowing from its heart – people, nature, sunsets, smells of the earth and probably thousands other elements, not always consciously noticed. Whoever opens themselves to Africa, will return here, because stars shine differently here, nature is within arm’s reach, and the sun colours the world with warm tones even in winter. We say goodbye to Namibia in yet another park full of wild animals – the private Erindi park. We met a wild dog here which we hadn’t seen in Etosha and a white rhinoceros. It’s twice as big as the black one in Etosha. In reality, they are of the same colour, and white supposedly comes from a mistake in English – somebody once said “white” instead of “wide” (wide jaw in comparison with a narrow one a black rhinoceros has) and so a white rhino appeared. It weighs twice as much as the black one (up to 2.2 tons) and it has a different jaw – it’s wide at the bottom and not narrow like in the black one, which reminds me of a small stegosaurus:). Up to this point, despite many efforts we hadn’t seen a lion with a mane (i.e. a male, we only meet females or young males not yet having a mane), and we haven’t seen a leopard. And apart from million others, we have another very important reason to return to Namibia.