Sweden. How we survived the timber rafting on Klarälven river 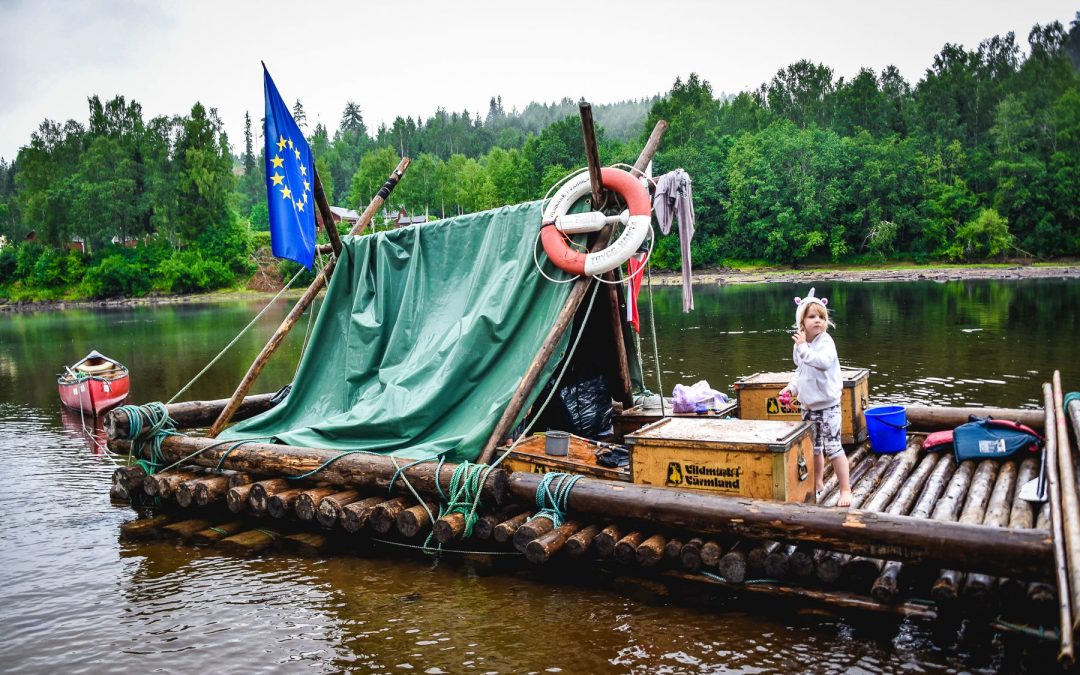 How it all begun

We fell in love with Scandinavia five years ago.  Nowhere in the world have we found such simplicity of living in great comfort, connected with being surrounded by nature, which strucksith its beauty all around. Sweden is particularly close to us thanks to its literature. Starting with Pippi Longstocking Children of Noisy Village, Emil of Lönneberga ending and ending with the best crime novels in the world… there is a lot to choose from. Our idea for this holiday seemed simply brilliant. Just Like Huck Finn, we decided to raft down the Klarälven River. But to be honest, we had no idea what we agreed to and what was waiting ahead for us. It took us a few hours to build the raft on our own. I hope we ’ll remember the skill forever but I doubt we will ever want to make use of it. When the next day the mist over Klarälven River faded away, we slowly set off along the banks of the river, observing the surroundings admiringly. From that moment on, the 15 m2 became our everyday haven home, drudgery and a great adventure all in one.

For many years the river has been used for log drifting, it is 460 km long and enters the Wener Lake, the biggest lake in Sweden. Our part of the rafting trip was 45 km long, actually I read about the rafting trip  in National Geographic in their “list of 50 trips you need to do before you die”. So, when planning this trip I solemnly believed that we would be relaxing in the raft, flowing lazily down the river, soaking our feet in water and drinking coffee (it is so Sweedish!), we would read stories to kids and admiring the nature surrounding us… Well it is very natural to make mistakes not only on the trip?

Our first overnight stay was on the island, more or less in the middle of the river. Docking the 2 ton heavy raft evoked so many emotions, screams and ended up with an absolute success. We were very fortunate. There was absolutely nobody else on the island but us and the ducks. Morning coffee with the view of the mist and complete silence gave us strength to working hard when steering the raft. Shallows and underwater rocks meant new troubles and another blisters on our hands. Luckily it did not kill the team spirit. Every now and then we went off in our canoe to find a better rafting route. We also put a flag over our raft.  After voting, we decided it will get a Polish and European Union flag. Since then we stopped being anonymous ?.

The following day brought some new challenges.  Every now and then we got stuck on the shallows or hit the underwater rocks. All that required lifting the raft and pushing it up the river that is against the current. On one hand every such incident drained energy from us but on the other it gave us even more power every time we overcame the forces of nature. Fortunately there were  moments when we could sail idly, just admiring the nature around us. When the strong wind picked up it constantly turned us to the creeks, evacuation of the raft required us to forcefully ull the rope because we couldn’t push the raft only with oars. We had to take off the canvas which almost like a sail, took us in the opposite direction to the route we set. When the rain came down  pouring  from the sky, soaking wet we decided to dock for the night to the shore. Despite the fact that our calculations told us it was way too early. The river bank seemed just perfect and the raft was somehow pushed just in front of the stairs leading to the high riverbank. The parcel was just adorable, with mowed ass and fabulous view of the river. Kids were delighted with our discovery of a marvelous spot. Meanwhile when the rain came down and after we managed to put up our tent, the sun came out . Soon after came the owner of the parcel  to meet the intruders. Luckily our tent did not bother him even though it was closer to his house than 150 meters as stipulated in Allemansrätten*  which is the Swedish law defining the access to nature.

*it is deeply rooted in Scandinavian culture law allowing everyone to enjoy nature and its resources. On the basis of this law one is allowed to pick mushrooms, berries, put up the tent almost everywhere keeping the distance of 150 meters to the nearest housing.

On the fourth day we set off in the early morning so that we could make up the time lost for setting the camp in the downpour. Unfortunately shortly after we set off, our raft got stuck in the creek where we were constantly pushed off by the wind. We spent there almost two hours. We fought bravely the current until we won. We continued our journey down the Klarälven river. At 7 in the evening we were really tired, but we knew that to finish our adventure on time tomorrow, we needed to sail for another  two hours. The river current become faster due to the high wind and we become weaker and weaker. At 9 we started looking for a place to camp. And then suddenly came apocalypse. The raft got stuck on the shallows and the fast current pushed it more and more towards the sandy bottom. It was getting dark, the dusk was close and we were stuck in the middle of the river, far from both banks. We couldn’t tie the raft to anything. We did not give up, yet we were fighting with the current, massive raft and ourselves. The only plan B was to call the helicopter, abandon the raft but frankly speaking, a surrender was out of the question. The youngest kids were fast asleep and the three of us, together with the third one, a 10 year old “borrowed” from my sister, were pushing the raft hard every 3 cm, on one- two- three. We were struggling in the rain, knee-deep in water but the midnight brought us success. The raft moved forward! It was unbelievable. Despite the darkness, the cold from hours spent in the water we did not give up though every now and then someone wanted to quit but encouraged by others soon gathered energy to fight and push the raft.

Cows in the morning

Unfortunately moving the raft forward was only the beginning of next troubles. Absolute Swedish darkness was around us, lit only with the light of our torch. Hands swollen and full of splints hardly paddled the way to the shore. On the left side was a steep river bank full of bushes and thicket impossible to climb, the right side was so sandy that we knew if we get there we would not have the strength for another battle. We chose the left side but because of the strong current  we could not come closer to the land for the next 500m. We were sailing fast, down the river in total darkness all soaking wet, cold but very determined to come on land, put the tent up and sleep. Finally just after an hour we spotted a little beach on the left steep side. I was so determined that I jumped into the water with the rope and tried to make it to the shore before it would be too late to tie the raft to the nearest tree and the raft wouldn’t be taken by the river current. The adrenaline was so high that I did not even notice that my hands were cut by the barbed wire that was hanging on the tree. We were safe! We put up the tent in the rain and darkness, evacuated the kids and clothes together with Jędrek and went to sleep. The morning woke us up with cows moooing. It turned out that we put up the tent in the middle of the cows grazing, which to our surprise was the greatest joy for the kids. They were on top of the world. Only when we realized that one of the cows was a virile bull we escaped back to the raft jumping between the cow pies.

This is the end

We completed our journey on the fifth day. We built a proper raft it withstood the struggling, hitting, swaying, the sand and the rocks. Hardly did we reach the land when the terrifying storm hit the north-east Sweden, we passed fallen trees on the way. We made it in time. Those who were still on water had no chances to sail, they had to abandon their rafts and call for help. We were tired and proud of our victory. What was meant to be slowlife rhythm turned out to be an everyday struggle to survive on the water. After some time later it meant much more, it was a reminder of our strength in finding a way out of deep water. Before we could get into our car we had to dismantle the raft?.We have borrowed the logs and the logs together with the ropes, packed separately to the chests, had to be returned. It took us over two hours and we were free, though the feeling of swaying accompanied us for next couple of days…

To rest after the raft experience, we chose the lake nearby a town called Värnamo. In the neighborhood you could experience the beauty of Stora Moose National Park. We were there during the drought and the fires so there were no amps, but yes ! there were stunning moors. We also visited the moose park which was quite further away. It was different from other moose parks in the way that you could drive your car in the park, not only watch the animals from behind the fence. Don’t you love Swedish holidays? 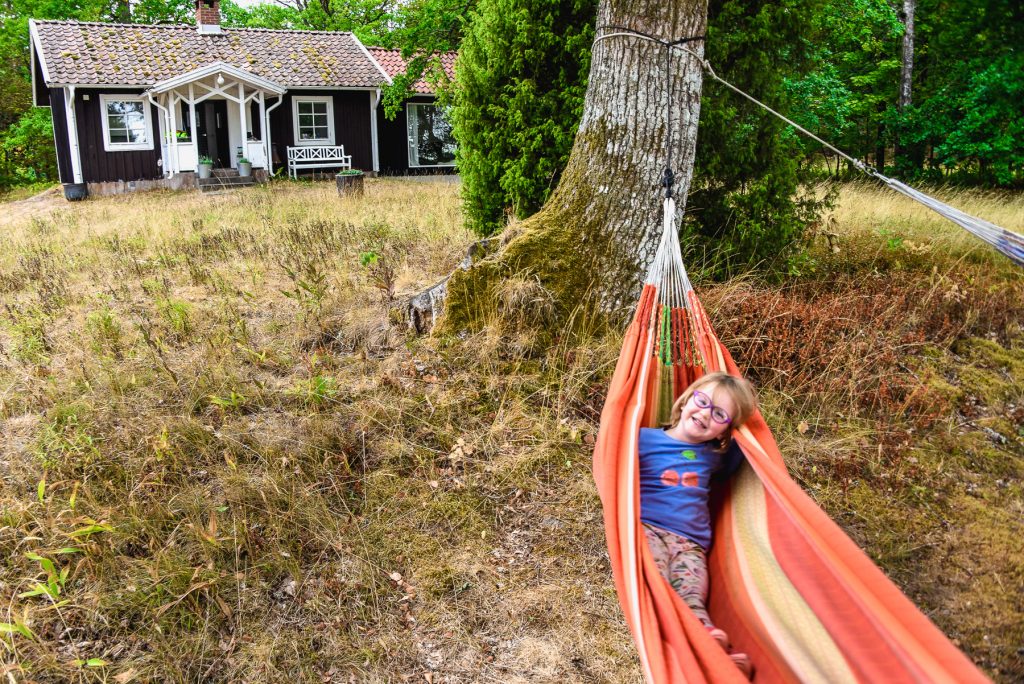